I Remember my Mother Mother's Day is a relatively modern “special” day. It was officially celebrated by the Americans in 1914 when Woodrow Wilson signed the proclamation setting aside the second Sunday in May, as a national holiday to honour mothers. However, it was first celebrated in 1908, when Anna Jarvis held a memorial for her mother, Ann Reeves Jarvis, in Grafton, West Virginia. She campaigned to make "Mother's Day" a recognized holiday in the USA in 1905, the year her mother died.

Her mother was a peace activist during the American Civil War of the mid 19th century. She was carrying out acts of kindness by caring for wounded soldiers on both sides of the conflict. The original Mother’s Day was created by her as Mother’s Day Work Clubs to address public health issues she encountered in taking care of the wounded.

In setting aside a day to honour mothers, whom she aptly described as "the person who has done more for you than anyone in the world", Anna was also honouring her own mother by continuing the work she started.

Reflecting on the origin of Mother’s Day, I find myself agreeing wholeheartedly that in my case, my mother has, without a doubt, done more for me than anyone in this world. She passed on to her eternal home in 1991, and every year, whenever I am in Singapore, my sister and I visit her at the columbarium during the Easter season.

I remember my mother as a resilient person. She was widowed when she came to Singapore with two children in tow to make a new life for herself before World War II. It was here in Singapore that she met my father who was also widowed. My father started a small business and when it failed, he apparently gave up trying anything else, and my mother was left to take care of the family of 5 in the blended family. I remember her working two shifts in some factory to support all of us. She was positive, highly energetic, extremely hard-working and responsible. Singlehandedly, she managed to ensure that we had three meals a day, every single day.

I remember my mother as a life-long learner. Though not formally educated, she managed to learn how to read Chinese later in life. When she started attending a Chinese Church in her 60s, I bought her a big-print Chinese Bible which she faithfully brought to church every Sunday. One day, I found her reading it on her own. She had been learning how to read it by listening to the preacher and with the help of some tapes.

I remember my mother as a self-disciplined and tough-minded person. She had been a smoker for years, as far back as I could remember. Then one fine day, when she was in her early 70s, she simply stopped smoking. I asked her what caused her to stop smoking. She said, “Last Sunday, my pastor said in his sermon that smoking is not good for us. If God intended us to smoke, He would have made our noses turn upwards like a chimney.” She pondered over it and realized it made sense not to smoke and she simply stopped. To the end of her life, she did not light up ever again.

I remember my mother as a kind person. We used to live in an old pre-war house on Kallang Road near the Kallang River where the Kallang MRT now sits. Our home was only a stone’s throw away from the old half-moon bridge that no longer exists. One day, I can clearly recall, there was a commotion at the bridge. Many of our neighbours were gathering around a woman who was apparently saved from the river. My mother was armed with towels and a blanket, busy drying her and wrapping her with the blanket. A week or so later, we received some home-baked cookies from the grateful woman. Apparently, she had fallen into the river and was saved by the neighbours. And my mother was one of those who took care of her following the episode.

I remember my mother was a talented person. She cooked some of the best Teochew braised ducks and steamed fishes I have ever eaten till this day. She could whip up a good meal at the drop of the hat. And best of all, she always kept the juicy drumsticks for me! When she was with us in Canada, in her late 70s, she was still knitting the most delightfully attractive woollen sweaters for our children!

And I remember my mother as a selfless and thoughtful person. For most of her life, she was blessed with good health despite the fact that she was a smoker. But in her mid-80s, her health started to fail. On one occasion, she was admitted to hospital when I was still working abroad. My sister advised that I should return for her, and I did. However, during the week I was back, her health took a turn for the better. I was in hospital to arrange for her discharge.

Soon after, I bid my farewell and returned to the United States where I was then working. A couple of years later, I received a call from my sister informing me that my mom had passed away and that I should come back immediately because she had left instructions for me to conduct her funeral service at the columbarium chapel. I wondered why my sister and family did not inform me that mother was seriously ill, and only informed me after she had passed on.

It did not take long for me to have my questions answered. Apparently, while my mom and everyone was rejoicing that she recovered the last time I was back when she was ill, she was troubled by the thought that she “troubled” me and “wasted” my time. So when she was seriously ill again, she instructed my sister that I should not be “troubled” again, unnecessarily, until she has gone. She also instructed that she wanted me to be there to conduct her funeral service. The reason for not wanting to “trouble” me? To her selfless mind, it was very simple. I was a professor at the university and a minister of a church in Washington DC. I was doing important work and many people needed me where I was. She was well-looked after by my sister and her family. There was no need to “trouble” me as she did the last time. Therefore, have me come back only when she is gone.

What a mother she was!

Many who have known my mother say that I am very much like her in physical appearance and character. I like to agree except that I still cannot boil an egg properly, let alone cook a meal. And she is far more beautiful in every way.

But still, all the important values I have learned, I learned from my mother. She is the person who has done more for me than anyone in the world. And today, and every day, I want to honour the memory of my mother. 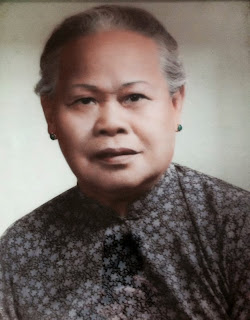 And to all mothers, I do wish you a very happy Mother’s Day!
Appreciation Children Mother's Day Mothers