November 14, 2017
A few days ago, a Friend of 50 years shared with me a story over dinner.  Her lady friend was comfortably seated on an MRT train when a pregnant lady boarded the train.  She stood up to give her seat to her but before she could take it, a young man rushed across her and took the seat.

The young man settled down and started to wear his earphones and began watching a show on his iPad, completely ignoring the pregnant lady in front of him. It was obvious to him, and everyone else around that just-vacated seat that it was meant for the pregnant lady as the one who gave it up was still on the train, now standing next to the pregnant lady.

Unfortunately, no one spoke up for either the lady who gave up the seat or the pregnant woman who was meant to be the beneficiary of that kind act.  It was a classic case of the bystander effect. The kind lady who gave up the seat then spoke up.  "Hello," she said ever so gently, "I gave up the seat for this lady, not for you," pointing to the pregnant lady standing next to her.  There was no response as the young man was fully absorbed with his iPad.  "Hello!" She said again, this time more assertively.  The young man looked up as if surprised and retorted, "What's your problem, woman?!"

She was completely taken aback by such utter rudeness and unreasonableness.  She was trying to find words to respond to him, when a heavily tattooed man, came up from nowhere, stood in front of the young man and pointed his finger at him, accompanied by a typical threat in Hokkien.  Simply translated, he was told to give his seat to the pregnant lady or else...

To the great amusement of the two ladies, the young man jumped up instantaneously and literally walked away with his tails between his legs.

This story reminds me of a quote attributed to the infamous gangster Al Capone of Chicago. 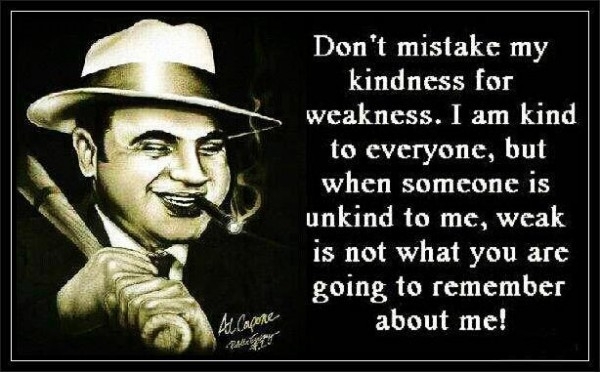 As the face of kindness, I am often asked if kindness is still relevant in our society today.  More specifically, I am told that it is not relevant because kindness appears weak and therefore taken advantage of in this dog-eat- dog world.

For that reason, when I was interviewed by Susan Long some years ago for the Straits Times, she titled the piece Kindness with Muscles.

I was also asked by the folks who were concerned about scams in the charity world to write a piece which I titled Cheated by Kindness. 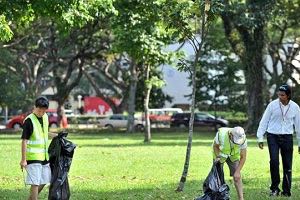 Recently, Deputy Prime Minister Tharman, speaking at the Clean and Green Carnival pointed out that in spite of all the efforts, we are not making much progress in keeping Singapore clean.

Many of us who are seeking to keep Singapore Clean are very frustrated by the lack of progress. The soft approach does not seem to work. Perhaps it’s time to try the Tattoo Power in enforcing the law against littering in a more concerted, intensive and sustainable manner.
Activists Community Environment Humility Humour Kindness Kindness Quotes Littering MRT Singapore Transportation