Young people are kinder than you think!

September 04, 2012
According to the Graciousness Index released in March, Gen Y (16-29 years old) have exceeded all the other generations in their sensitivity to kindness. As if to confirm this as a fact, PM Lee identified a number of Gen Y activists who are champions of kind acts, including Mohammed Farhan, the founder of Voluntaries. We honour all of these and others too many to mention, and in particular, we are very proud of Farhan who is one of us in the SKM family. He was our intern on two occasions and was also a part-time staff member.

Recently, several groups of JC students from Pioneer, Victoria , Hwa Chong and Raffles called on me to share their ideas how we can inspire a kinder and more gracious Singapore. These Gen Y representatives are bubbling with exciting ideas to deal with the reality that many commuters are not aware of the needs around them. Gen Y are not only sensitive to the need to be kind, they are also prepared to give the benefit of doubt to those who are not giving up their seats. It is their view that these commuters are self-absorbed and therefore not aware of their surrounding rather than that they are not willing to give up their seats. 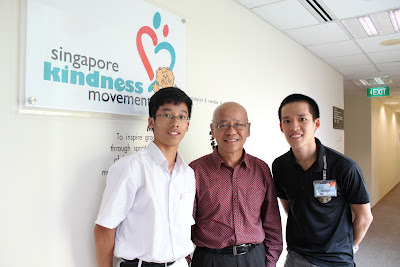 One group came up with a retractable seat idea on the MRT. Commuters with a special need like pregnancy, or old age or otherwise in need may register with the appropriate authorities and be given a card which he or she can use to tap in order to use the retractable seat. When not in use, it will provide standing room for commuters. Another asked, “Why not tap the card and an announcement would automatically be activated announcing a request for a seat?” Yet another suggests that when commuters step into the alighting area of the platform when the train arrives, it will activate an announcement requesting them to give way to those alighting by standing to the side.

These young people are sensitive, creative and inventive. Contrary to some perceptions, I am convinced that they are inherently kind. In fact, the assumption made by many that just because Gen Y is internet savvy, it follows that rude and ungracious netizens must necessarily be members of Gen Y. I do not think that it necessarily follows. Judging from what we experience outside the virtual world, I dare say that the small number of cynics among us are much older than the Gen Y.

Our young people are kinder than you think!
Activists Kindness Youths