Kindness in the Year of the Goat

February 23, 2015
On Wednesday 18th of February, more than a billion Chinese around the world welcomed the dawn of another lunar new year. In traditional Chinese astrology, different animals symbolize the character of the year in a twelve-year cycle. This New Year happens to be the Year of the Goat. Some prefers to call it the Year of the Ram, and yet others, the year of the Sheep. In Mongolia, they prefer their gazelle!

There are people who debate about which is the correct animal. According to an official Xinhua news agency, some scholars argue goat is a better option for the traditional Han Chinese holiday, as it is a more commonly kept farm animal for the dominant ethnic group in China. But many Chinese folklorists think that the debate misses the point. What is important is the connotations of the sign rather than the specific nature of the animal.

The symbol 羊 (yang) can refer to any member of the caprine family. For example, a goat is a "mountain yang", a sheep is a "soft yang" and a Mongolian gazelle is a "yellow yang". In any case, goats, sheep and rams appear in traditional Chinese new year calligraphy, paper- cuts, paintings, drawings and other festive decorative paraphernalia. 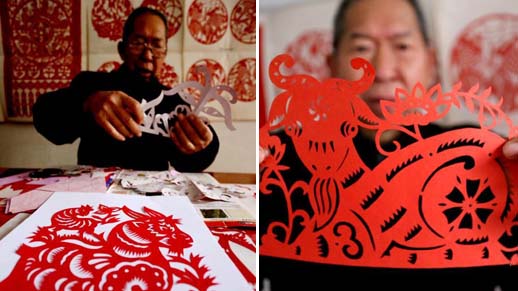 羊 (Yang) is a component of the written Chinese character 祥 (xiang), which means auspiciousness, and the two were interchangeable in ancient Chinese, experts say. Interestingly enough the character 善 (shan), which includes kindness and benevolence among its meanings, has part of 羊 (yang) in it. In fact, 新加坡行善​运动, the Chinese translation of the Kindness Movement is literally a movement that carries out the action of 善(shan).

Not surprisingly, 羊 (yang) is therefore a symbol of blessing and fortune and represents good things. This is supported by a 1,500-year old fable about five goats carrying crops in their mouth to save people suffering from years of drought in Guangzhou, the capital of Guangdong province where many ancestors of our Cantonese people hailed from. Today, the city of Guangzhou is also known as the City of Goats and the folks there swear that the city has always enjoyed good weather for bountiful harvest because of what the 5 goats did for them.


Some religions teach the need for sacrificing lambs to atone for the sins of humankind in order for the person to be righteous before God. The Chinese character for righteous is 義 (yi) which is made up of the character 羊 (yang) over 我 (wo) or me. Hence some Christians claim that the Chinese knew something about the need for humankind to be made righteous through the sacrifice of the lamb. Since to Christians, Jesus is the Lamb of God who made that sacrifice for humankind, the Year of the Goat has a special significance. Additionally, since Christians also believe that Jesus is their Good Shepherd, the imagery of the sheep or lamb is also very special this year.

During the festive season, Chinese food and goodies are selected and used because they sound positive and lucky. Hence, the mandarin oranges are used for bringing properity because its Cantonese rendition of the word for mandarin oranges is “kam” which sounds like “gold”. The favourite vegetable is black moss which in Cantonese is “fatt choy”, literally “hair vegetable” for they look like black hair. It is popularly consumed during this season because “fatt choy’ is also Cantonese for “to prosper”.

In the same vein, the word 羊 (yang) is heavily used in homonymic greetings. I have received so many of them, and here are a sample with translation (Notice how all of the sentences have the character 羊 or its variations):


In Chinese astrological reckoning, people born in the year of the Goat are born with certain characteristics. They are generally gentle, tender, polite, filial, clever, and kind-hearted and mild mannered, full of compassion and love peace. They are also sympathetic, empathetic, very stable, serene and calm.

Whatever you choose to believe, it is most appropriate on this Year of the Goat/Sheep/Lamb/Gazelle to wish everyone a blessed Lunar New Year filled with kindness and peace.